I have written six books about the zombie apocalypse, and all six take place in the St. Louis area. Much of the story also takes place in Jefferson County, Missouri, just to the south of St. Louis county. Since this is where I live, it makes it convenient for me to do research.

One of the advantages of all this local lore is that it simplifies author interviews with the newspaper for my county. In fact, they did a nice feature of me on page 1!

On a recent trip to Kentucky Lake, my family stopped at the confluence of the Mississippi and Ohio rivers. As you readers know, rivers play an important part in post-apocalyptic America in my series. In book 6, the confluence of the two rivers–at Cairo, Illinois–becomes a focal point for the story. I thought it would be cool to stand on the very tip of the land south of Cairo and snap a photo of both rivers at their meeting point. Standing in Illinois, the bridge to the left is linked with Missouri and the bridge to the right is linked with Kentucky. A very interesting piece of Geography, and an excellent place to fight zombies!

The photo below is looking south at the muddy Mississippi on the right, and the Ohio on the left.

This is my official unveiling of my newest book cover. Zombies Ever After is about the struggle of my two teen main characters as they claw their way back to each other after being apart in the Zombie Apocalypse. I thought the imagery of them both looking out onto the horizon was very compelling for the book. Even though I think this volume has more characters in play than any of the previous titles, I tried to write it so that Liam and Victoria are the focal points for where the story is going with this one. I can’t wait for you to read it!

Please click on the cover image to see the full size version of Since the Sirens. 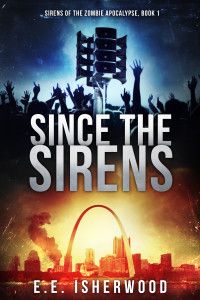 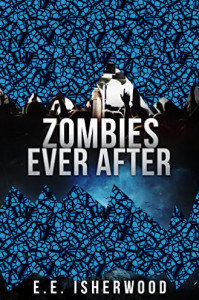 Things move fast in the world of my zombie series. I released book 5 less than a month ago, and I’m already 52k words into book 6. I’m calling this one Zombies Ever After. I think it will be the last one, for a while, that is set in the St. Louis area. There are things calling to Liam and Victoria from out of state…and I think they’ll need to go explore.

Part of me worries that spending too much time in the same area will turn people off to my series of books in general, though I’ve tried to make each book unique within the region. If I find myself on the verge of duplicating a location of a prior book–except for very brief stops where it makes sense–I’ll change things up. After 6 books, this will really take the series in a new direction, with new zombie challenges.

I’m taking some extra time to write this novel, and to promote it. As such, I’m not revealing the cover just yet. I just have this teaser image for Zombies Ever After.

My zombie series is reaching a new milestone with this volume. New horizons await Liam and Victoria, though I can’t give anything away just yet as to what their next adventures might be. 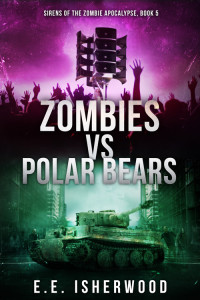 The fifth book in the Sirens of the Zombie Apocalypse series launched as planned on June 23, 2016. I’m too tired to really outline the launch–the last week has been hectic, to say the least. However, the ending of the book was just screaming for me to jump into book 6, which I’ve done. I’ve already got the prologue and first chapter done. I had to know how things turned out…

That’s the fun of being an author. I don’t have to wait for the next book to come out.

Jump over to Amazon and grab a copy!

Armand Rosamilia and Mark Tufo interview E.E. Isherwood on Arm N Toof’s Dead Time Podcast. It was my first voice interview and I couldn’t have found a better venue. Two of my favorite zombie authors work together (or against each other, you never really know) and gave me an hour of their time to talk about my books. At one point I was even described as a genius for how I marketed my books, but I was so dazzled by the egos in the room I forgot to mention the name of my book, the name of my book series, or the name of my website. SOME GENIUS!

Those guys are hilarious to listen to anyway, but being there was an author’s dream. NSFW (language). 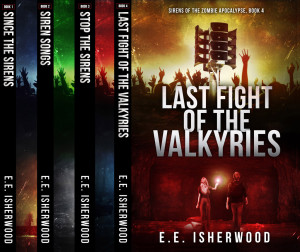 This is the week when I finally get caught up! I’ve been trying for months to get my zombie books into print, but there is always one thing or another that gets in my way. I should have the proofs this Friday for Books 3 and 4. People have been asking about this for just as long as I’ve been writing, and now I can finally put this baby to bed. Book 5 might hit print at about the same time it goes digital. That’s the dream anyway!

So zombie book 5 is titled Zombies Vs. Polar Bears. What does it mean?

In my universe the United States is very similar to present day. The (opposition party) won the presidency in 2017 (when the book takes place). Lots of Americans rose up to protest, and the movement became known as the Patriot Snowball because it kept growing larger and larger. Their flag had an angry polar bear on it. No one messes with a polar bear. Thus, if you were a Patriot, you were nicknamed a polar bear.

This book digs into a little of the origin of the movement, and the results. Liam is always digging for the truth, and the official word from government-sanctioned media is that the Patriot Snowball released the zombie plague on the world. A ridiculous claim, especially since Liam and Victoria have an inside line on other aspects of the plague and where it came from. But can they prove anything in a world where the internet is collapsed and the loudest speakers are controlled by the government?

And the zombies continue to intermingle. The “climbers” from Chicago have spread out far and wide, making it as far south as Cairo. The “dreamers” from Kansas City have reached the suburbs of St. Louis. And what’s so special about St. Louis zombies? We still don’t know…

Lots of stuff going on today. Books on sale. Launch parties. Sleep (somewhere along the way). If you pre-ordered book 4, I recommend you delete it on your Kindle and re-download it right away. I added some last-minute edits and I couldn’t beat Amazon’s cutoff to get them in. I want you to have the very latest version when you crack into it!

Last Fight of the Valkyries on Amazon.

All my books are on sale. Check them out!